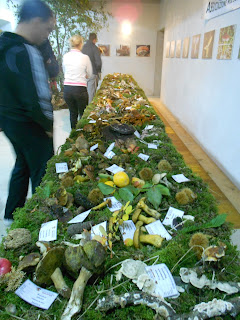 We heard that there was a mushroom festival on in an Istrian town - and headed over for a peek.  Tables were imaginatively laid out on mossy beds, 'planted' like fairy rings in creative clumps.

I had never seen so many mushrooms under one roof.

And not just the number of mushrooms, but the number of species was a novelty to me.  Each was different than its neighbor - there were dainty spindles, huge lumpy knobs, fragile stems no wider than a straw, enormous gelatinous masses of fungi - all marked carefully with both Latin and Croatian names.  And unfortunately for us, we couldn't identify most of them.

Fluency in the linguistic area would have been a definite asset in this situation! 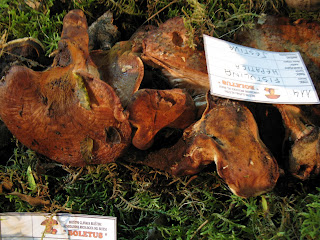 There are more than 100 varieties of mushrooms in this area of Croatia - an incredible edible panorama!  There are many more that lurk in the forests and fields which are of the deadly poisonous type.  We were warned that one in particular mimics chanterelles so well that it takes a very seasoned veteran to distinguish between the delicious and fatal.

Mushroom picking without a trained guide could be disastrous to a vacation... 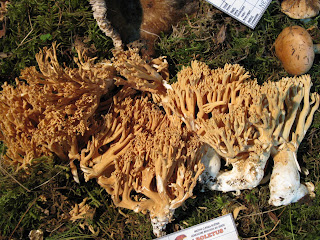 Several of the species laid out on the tables more closely resembled coral reefs than fungi to my untrained eyes.  Several were unrecognizable as a mushroom.  It was like entering another world, a world of fairies and gnomes and underground secret lairs, castles and dungeons and 'little people' of the forest.

The festival included a mushroom cook-off, and tasty smells drifted up from a lower floor, where presumably the local food gurus were preparing their mushroom delicacies unmolested by the enthusiasts gathered to look over the displays. 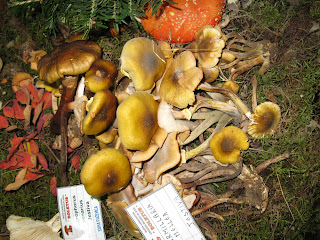 These displays opened my eyes to a world which had previously eluded me - now, when I go to a supermarket, I check out the stock of mushrooms.  We have tried several new varieties, using new recipes pulled from the internet.  They aren't Croatian - but they are new and different to our Canadian palettes, and I am glad for the travel which has broadened my food preparation horizons here at home. 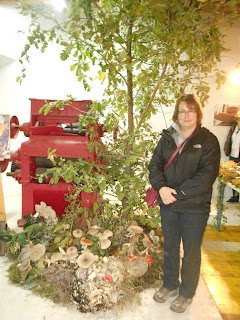 Exposure to new things, new vistas, new horizons, expands our personal vocabulary in so many ways.

So here's to the lowly mushroom - long may it grace our tables and fill our spirits as well as our stomachs!


If any of you are familiar with the names of the mushrooms in these photos, drop me a line - I'd love to identify them!
Posted by Melody Lowes at 19:24