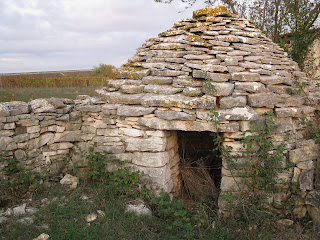 Dotted among the olive trees and vineyards of Istria, and concentrated mostly in the areas surrounding Vodnjan, you see many kazuni.  A kazun (pronounced ka-joon, with the central sound being similar to the 's' in measure) is a tiny round structure, constructed with a dry-stack technique out of the readily available flat stones so plentiful and abundant in the fields. 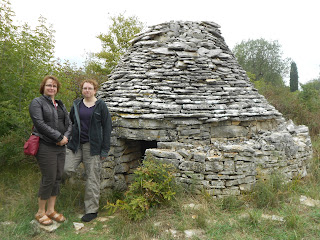 Most of them are tiny, only allowing 1 or 2 people to comfortably sit inside.  They have been used over the centuries to store food and other supplies safely out of the elements for those working in the olive groves and vineyards, and there is no reason to suppose that they were not built for this very reason during the time the mighty Roman Empire ruled with its iron fist -this is when they originated all over Europe.

Similar to the 'hiska' in Slovenia, the 'clochan' in Ireland, the 'graubuenden' in Switzerland, and other like sites in Spain, Italy, Scottland, and Germany, it is presumed that they were an encouragement of Rome, used in Istria in particular as storage facilities for workers producing the world-class olive oil so prized by Roman markets. 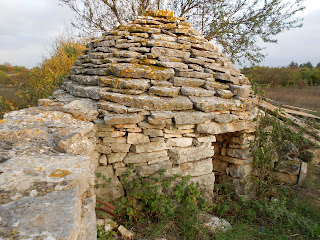 They are often found built into an adjacent dry-stacked stone wall.  I was told that the dry-stack technique was a result of the ease of movement for herds of Boskarina, an Istrian breed of cattle, as well as sheep and goats.  Shepherds could simply remove stones form a wall in an area in which they wanted to pass through, and close the gap behind themselves.

Declared national monuments, there are laws protecting these cute little structures all over Istria. 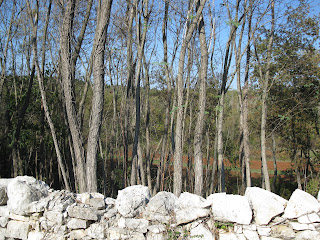 Stone fences are very commmon, especially near Vodnjan; marking the division of property, many of them have remained in place for generation upon generation.  Their foundations may be Roman, or even pre-Roman, with layers added throughout the years as farmers cleared their fields of the ever-present stones.

Often, the winding roads themselves are watched over by ancient border fences.  Many have kazuni built into their corners.  It is fun to try to spot them around every bend and twist in the road. 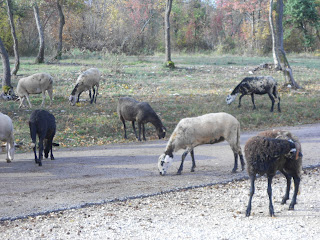 Shepherds today still watch over their animals in un-fenced areas.  These sheep were herded by a retired gentleman, who spoke such fast Croatian and Italian, we could only pick out a few words!  We gathered that his sons produced cheese just down the road - or  was it that his sheep produced sons up the hill?  Either way, the chat by the side of a
narrow Croatian road, with fall foliage exploding in colour, stone fences and kazuni in the area, became in itself another wonderful travel experience.  It was like entering another era, a slower paced existence, to the days of the prairie pioneers where I grew up back home.

To read more about Istria's kazuni, check out www.stoneshelter.org  (a site which includes information on the nearby Slovenian stone structures as well) or http://www.istrianet.org/istria/architecture/rural/casite/index.htm , which will give you detailed information including maps of kazun locations.
Posted by Melody Lowes at 09:27