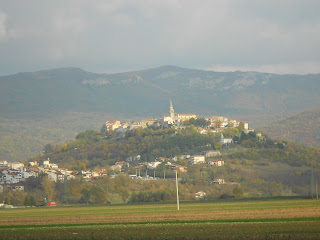 The town of Buzet is nestled romantically on a hill at one end of a flat-bottomed valley, deep in truffle territory.  Every year in November, it hosts the Truffle Festival, a trade show showcasing local products, and of course, the coveted white truffle.  There were demonstrations, a cooking competition, a band of local musicians, roasted chestnut vendors, and numerous other delights available to scintillate the senses. 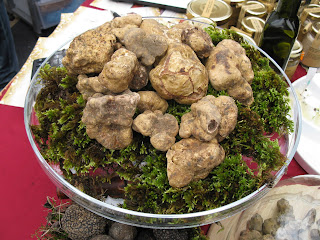 Black truffles are more common than white, and can be found at any time of the year.  White truffles, on the other hand, can only be harvested for the fall and winter season.  They are highly prized, and are sold for exorbitant amounts of money to restauranteurs and foodies.  They have a distinctive, earthy and rich flavour.  Shavings commonly top pasta dishes, or are made into condiments and aromatic oils.  They are absolutely delicious! 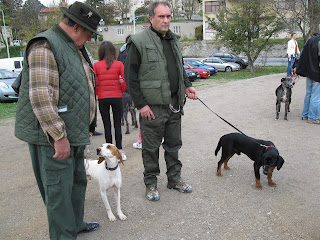 Truffle hunters guard their territory with religious fervor.  Their dogs, so valuable in their ability to sniff out these musky, fungal-like delicacies,  are treasured and treated like a member of the family.   During the Festival, shows involving dogs finding truffles are very popular.  We were amused at the dog show.  When the audience clapped and smiled, we did as they did.  Of course we had no idea what was going on during the entire proceeding!  But, when in Buzet, as in Rome, you know.... 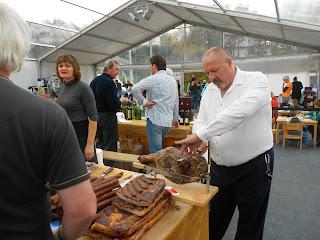 The tradeshow displays in the large white tent were absolutely fascinating, not to mention delicious!  There were large haunches of prsut (the delectable  Croatian version of prosciutto ham) being sliced paper thin with a practiced hand to release its full flavour.  Each selection had a unique aromatic artisan taste, depending on the method and place of curing, and the heirloom recipe, handed down through many generations. 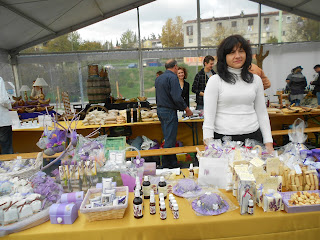 Tables were stocked with local wines, jam, acacia honey, freshly pressed olive oil, and numerous other traditional treats, as well as handcrafted items. The piece de resistance, however, was this lavender seller.  I was admiring her products and the labeling when I realized that her products came from Sveti Lovrec, the village I had been so seduced by earlier.  When she revealed to me that her products were all handmade from the very lavender fields we had been exclaiming over, I was sold.  Thrilled and gushing volubly about my purchases, the vendor invited me to pick her lavender if I were in the area next summer.

When I think about that day, the richness of the experience, the tasty Croatian delicacies I sampled, what I learned and saw and smelled and lived - I am again reminded of why the land of Croatia has become so near and dear to my heart.