In Which I Storm a Castle 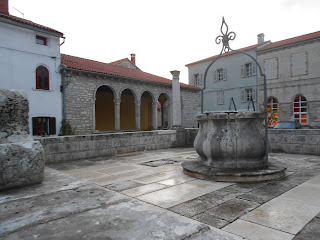 In the town of Svetvincenat (St. Vincent), a history buff finds fresh fodder for a ripe imagination.  The lovely town square is bordered by its Renaissance church, Venetian bell tower, and administrative loggia, all dating from the 16th century.  A tiny chapel built in the 14th century is decorated with valuable frescoes.  The town well dominates the central area of the square.  It is first mentioned in ancient texts from 965 AD, so its roots evidently reach deep into history itself. 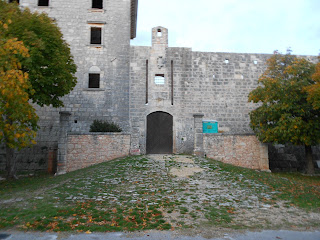 The town is situated in the midst of pastoral greenery - olive groves, vineyards, small farms, and livestock producers live in the surrounding countryside.  Approximately 100 varieties of mushrooms also make Svetvincenat their home.

The piece de resistance is the 15th century castle which dominates one side of the square.  It boasts several towers - two round, one square.  Formerly luxurious living quarters overlook the square in regal austerity. 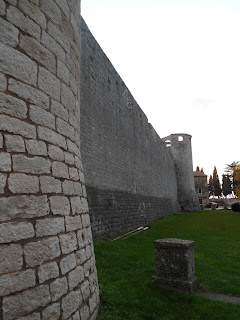 The castle door used to be approached over a drawbridge - in modern times, one walks over a much less romantic dry ground approach.

Intrigued, we walked around the entire castle's perimeter.  Wherever there were tiny apertures, I peered longingly at the interior.  Several times I expressed my wish to enter, and was feeling rather dejected that the gates were shutting me out.  I wanted to explore this fascinating edifice! 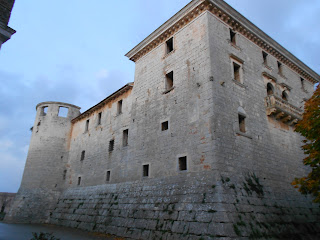 This castle was the center of a politically intriguing and varied history.  Changing hands often between the various powers that be, it played an important role over the years.  The stories it could tell include Templar Knights, monks and ancient abbeys. It may even have been silent witness to the torture and stake death of a young woman accused of witchcraft! 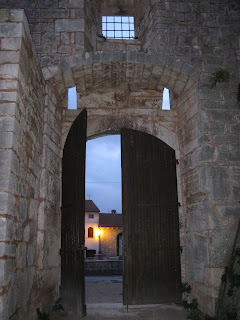 Built earlier, there is an inscription over the door labeling 1485 as its 'official' origin.  It is named after the Grimani family, 2 sons of which married the daughters of the previous lord, who had died without male heirs; the Grimani boys are credited with reconstructing its walls after the castle was  damaged in the 1500s.

When we had walked its full extent, my brother-in-law was amazed to note that the gates were now open!  We wandered inside, and saw a crew busy at work on a major restoration project.  Not knowing whether we were allowed in or not, we stormed the gates boldly and entered without a shot being fired! 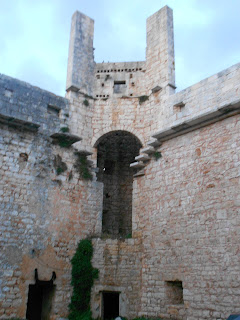 The crew kept to their tasks, apparently unalarmed at the Canadian invasion.

It was easy to imagine the servants scurrying about within those massive walls, and visualize stiff ballgowns, cannon fire, and  political intrigue in secret passageways!  In close proximity to the past, I found myself once again thinking of  the variety of human dramas that those ancient stones have participated in over the centuries.

Not wanting to disrupt the crew's labors, we took a cursory look at the work in progress and at the views within the walls.  We slipped furtively to our car unnoticed, our mission accomplished.

I melted into the evening shadows, reflecting that it is a lot easier (and a lot more fun) to storm a castle than I had imagined!