Pirate Caves on the Limski Kanal 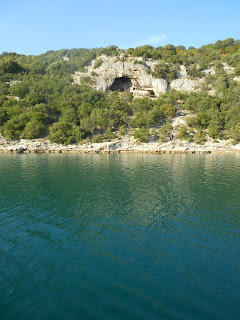 The Limski Kanal looks much like a fjord -  rocky cliffs smothered in forests rise steeply from a sparkling blue Adriatic sea.  Located between Vrsar on the north and Rovinj on the south, the canal is host to mussel farms at its narrowest end, at the point where waves hug the inner coast.

Our first glimpse of the 'pirate cave' was from the vantage point of our tour boat, which chugged us from Porec to Rovinj for some splendid sightseeing.  There are numerous caves in this area, rumoured to have been  utilised by pirates in the not-too-distant past.  Evidence links these caves to much older occupation - Ice Age relics have been retrieved which indicate human use up to 12,300 years ago! 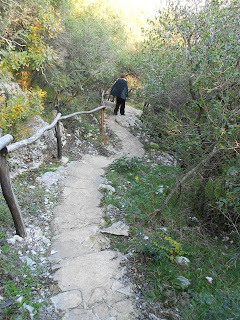 Boat rides are a popular tourist activity in the Limski Kanal.  Nearby Vrsar, with its well-appointed marina, attracts the yachting set, who like to stop by the Pirate Bar located in one of the caves on a hot afternoon.

There are scores of biking and hiking trails in this area, and we heard that some of these caves were also accessible by land.  The cave we were seeking, dubbed the 'Pirate Cave', is arrived at by dint of an incredibly steep stone staircase, winding its way down the cliff like a droll snake whip.  That staircase was indeed a curiosity in itself.  From time to time, the sea in its sparkling finery peered at us between majestic trees. 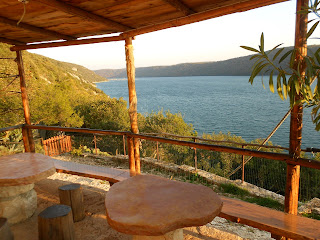 After the winding descent, we reached the cave proper.  A pirate-themed bar is perched at an alarming angle atop the cliff overlooking the sea from the cave mouth itself.

The cave, devoid of anything material save a small band platform and some graffiti, is a large enough opening to hold numerous guests.  One can clamber around on the rock floor, worn smooth and slick by thousands of visitors, enjoying the different angles and viewpoints of the sea.

The outhouses are clinging so precariously to narrow passageways and cliff-sides that I had a hard time not imagining scores of drunk folks slipping to their deaths!  In Canada, any potential hazard is so well-marked.  Here, no signs warned of the pitfalls of a misstep on the way to the loo.  I was forced to conclude that either Croatians have a better center of gravity and balance than all other races, or that the rabbit-trail pathways are a good way of weeding out weaker genetics. (!)

Day was just making its first farewells as we stood upon that height, smelling the sea and enjoying its glittering jewel-tone waves. 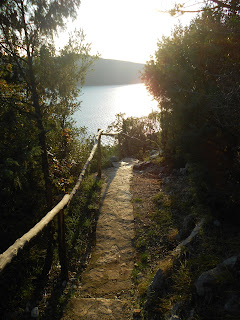 We wondered at the expense and effort of lowering supplies down that treacherous staircase.  We wondered at the oldest occupants of the area from days long past.  We gaped at the view.  We admired the biking trails through the forest above the sea.

We didn't know at the time that the 1958 movie 'The Vikings' starring Kirk Douglas had been filmed in the Lim Bay.  The setting was perfect for swashbuckling adventure and loot and bands of brigands!

If you are ever in the area, it is an interesting place to visit!