Peka Pushes My Palate Into a New Bracket 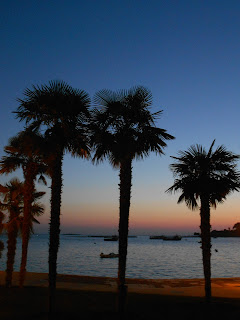 There is a Croatian speciality called peka that is so darn good, it has made me angry.

It has pushed my palate into an entirely new bracket, you see.  Created a monster appetite, if you will.  As there is nothing remotely like it in Canada, I am beginning to nurse a grudge.  I think it is a Croatian conspiracy to ensure that at any time I have saved enough pennies, I will make a run for it to get my fill of the stuff.

It is a modern-day piracy of sorts, and I am hopelessly hooked.

The term  peka refers equally to a cooking dish, the method of cooking, and the resulting tasty morsels.  The dish itself is massive.  Inside are meat (any type will do - this night we had lamb), potatoes, onions, and a variety of seasonal vegetables such as tomatoes, zucchini, carrots, and so on.  Sprinkled with salt and pepper and doused in some local olive oil, the peka dish is put into the coals on the hearth of a konoba (a local eatery which uses its own freshly sourced, locally produced foodstuffs.)  You must call ahead, because the peka must remain banked with ashes for several hours, cooking slowly in its own juices.  The result is so astonishingly good, it makes my mouth water maddeningly at the thought.  The meat is fork-tender, the vegetables are crisped in the olive oil, and the flavours are outstanding.  The only thing that is close in my area is a pot roast with veggies added, but it falls sadly short in all categories.  I conclude that it is the fresh ingredients, olive oil, and fire-cooked method that push peka over the top.  We had one peka dish in which the meat was one huge squid and a sea bass.  You would think that the entire dish would taste like a fish.  But there was not even a hint of fish in the delectable, crisp potatoes or juices in the pan.  It was absolutely deadly delicious. 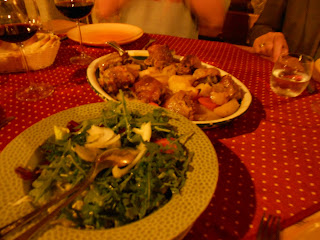 While eating at this particular konoba one evening, we noted the ability of our hostess to switch to excellent English on the fly as we were seated.  Later, an Italian couple came in.  This was interesting not only because they were so busy making out behind us, but because again our hostess switched effortlessly into Italian to accommodate them.  I was just wishing aloud for some Germans to enter and make the room complete, when lo and behold, in walked a German couple.  Fascinated, I watched our server closely to see whether she was up for the challenge.

She was, indeed, and rattled off a guttural prattle of German as if she had been born there.  Between the peka, the amorous Italian strangers, and our multi-lingual hostess, that evening was again a quintessentially Croatian masterpiece of cultural texture, aroma, flavour, and fun that has woven itself inexorably around my heart-strings forever.
Posted by Melody Lowes at 17:13