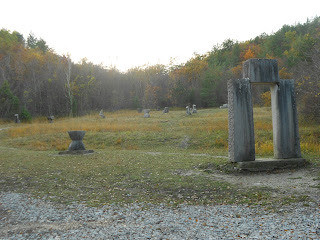 In central Istria, 11 monuments stand as a solemn tribute to an ancient script - together, they make up what is called 'Glagolitic Alley'.

Along the gently winding roads between Roc and Hum, various stone edifices mark the history of a script in common use from the 9th through the early 19th centuries.  Invented as a means of making the Latin scriptures more accessible to the local people, the alphabet consisting of 32 characters bridged a significant cultural gap. 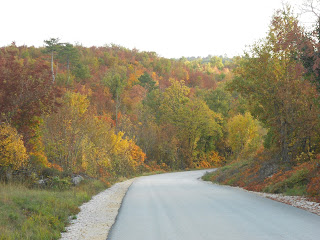 Credited to Constantine Cyril (from whom the term Cyrillian emerged), the system of ancient loops and swirls became the first written means of communication for eastern Slavic peoples.  As written language always does, it had the power to define and capture culture in new ways.  A written script gives a force of unity and identity as very few other factors can. 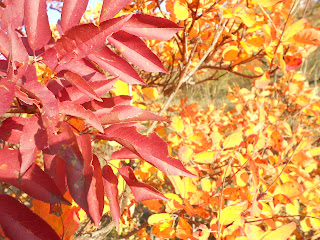 A drive through this area in November is stunning- the autumn breezes paint foliage in both reverent and spirited hues which capture the viewer's vision.  Each curve hides another gorgeous vista, each seemingly more breathtaking than the last.

Knowing that these rocks and hills were among the first to witness the birth of a language so long ago lends them an extra charm, mysterious and wise, an age-old stoic acceptance of the evolution of human thought and nation-hood. This is a chart of one form of the ever-evolving Glagolitic script.     Jewelry and souvenirs marked with variations on the theme make for distinctly Croatian keepsakes.  I was able to purchase several necklaces in Hum marked with the scrawled characters on lovely stone pendants.  A glagolitic souvenir is the quintessential purchase in central Istria.

My thanks goes to the author of Ancient Scripts for the use of his Glagolitic graphic.

Check out more about the history of this language here: